Posted on August 30th 2022 by Whats on Northeast 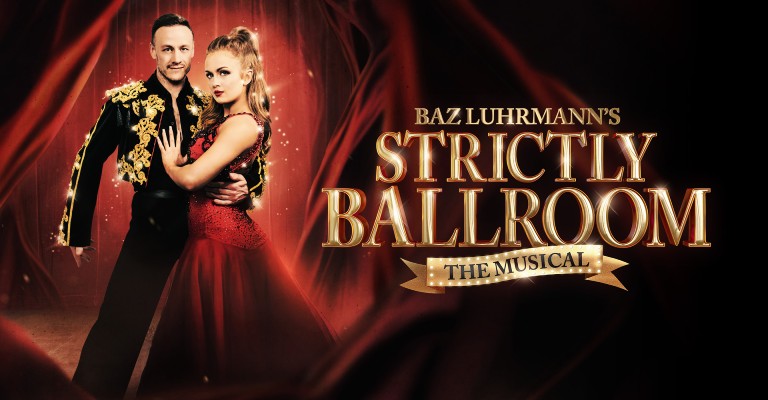 When Kevin Clifton was ten years old he watched the film of Strictly Ballroom and, as a budding competitive dancer, immediately saw himself in the character of Scott Hastings, recalling: “He was a hero to me and such an inspiration.”

Growing up in the village of Waltham, near Grimsby, Kevin was being taught ballroom and Latin by his parents Keith and Judy and told the four times British Latin American Champions: “I guarantee you that one day they’re going to make a musical out of this and I’m going to play Scott Hastings in it.”

Three decades later Clifton’s dream has come true. The 39-year-old former Strictly Come Dancing star is headlining the UK and Ireland tour of Strictly Ballroom The Musical and beams as he says: “It’s been a lifelong ambition of mine and I’m so excited that I’m getting to be in the stage version of my favourite film of all time.”

His co-star Maisie Smith, with whom he danced on the Children In Need Strictly Come Dancing special in 2019, is just as excited to be playing fledgling hoofer Fran. “It combines all my favourite things: Singing, dancing, acting, sequins and a bit of glitz and glamour,” says the former EastEnders actress and Strictly Come Dancing finalist who is making her musical theatre debut.

“It’s such an amazing role to play in my first ever musical. It’s such a feel-good show and everyone will come out of the theatre feeling the love and the excitement. And of course it’s got such great dancing and music in it – Latin flavours, modern tracks and some real classics.”

Kevin agrees. “It’s such an iconic story that everyone knows and can quote lines from, and on stage it’s a massively glitzy and glamorous spectacle. It’s a lot of fun and it’s a romantic comedy with lots of great dancing.”

Adapted from the film by creators Baz Luhrmann and Craig Pearce and directed in this new production by Craig Revel Horwood, Strictly Ballroom The Musical revolves around rebellious Australian dancer Scott, who causes a commotion with his radical moves and raises eyebrows when he opts to dance with absolute beginner Fran. Craig also choreographs the production with Strictly Come Dancing’s Creative Director Jason Gilkison.

Some 29 years since he first saw the movie, Kevin Clifton remembers relating to Scott’s desire to dance his way rather than following the rulebook. “I’m not sure whether it was something in me or whether it was totally inspired by the movie but I always felt the same way,” he recalls. “I was always more obsessed with entertaining an audience than winning a competition.”

Having gone on to become Youth Number One and four-time British Latin Champion, Kevin adds: “My coaches used to go nuts when I was competing because I would say to them ‘I would rather energise the crowd, make sure they have a great time and me come fifth in the competition rather than win whilst being a bit boring’.”

He was on Strictly Come Dancing for seven years from 2013 and won in 2018 with celebrity partner Stacey Dooley, and he notes: “Even on the show I would always chase an audience reaction instead of a 10 from the judges. I’ve always had that in me.”

Strictly Ballroom began as a short stage play that Luhrmann and his classmates devised in 1984 when he was studying at Sydney’s National Institute of the Dramatic Arts. It was expanded into a longer version that caught the eye of Australian music executive Ted Albert, who offered to turn it into a film. Insisting that he helm it himself, Luhrmann – who was already an established theatre director – made his screen directorial debut in 1992 to critical acclaim and box office success.

The movie went on to become one of the most successful Australian films of all time, earning a Golden Globe nomination for Best Picture and bagging three BAFTA awards for its costumes, production design and music score. The first movie in Luhrmann’s Red Curtain Trilogy, it was followed by Romeo + Juliet and Moulin Rouge! and hailed the arrival of a major new talent. It also remained dear to the director’s heart, so much so that he and co-writer Craig Pearce eventually turned it into a full-blown stage musical which premiered at the Sydney Lyric Theatre in 2014.

The show’s first-ever UK and Ireland tour will feature a cast of more than 20 world-class performers, such familiar songs as Love is in the Air and Time After Time and new music from artists including Sia, David Foster and Eddie Perfect.

Its central message of ‘A life lived in fear is a life half-lived’ chimes with Clifton. “I left my comfort zone of Strictly Come Dancing to do more theatre,” says the actor-singer-dancer, who had already appeared in Dirty Dancing, The Wedding Singer and Rock of Ages.

Since leaving Strictly he’s been in Singin’ in the Rain and Jeff Wayne’s Musical Version of The War of the Worlds as well as endurance contest The Games on ITV. “Training as an Olympian is something I never would have done that a few years ago. Now I’m all about getting out of that comfort zone and doing new things. That’s the message of Strictly Ballroom – doing what you love and going after the life you want to live.”

Too young to have seen the film when it first came out, Maisie Smith later caught it on TV and loved it. “The first time I was just watching the dancing so I’ve watched it again to prepare for the tour and it feels like the perfect fit for me,” says the 20-year-old stage school graduate who was just six when she first played Tiffany Butcher on EastEnders and left the show at the end of last year.

As a 14-year-old she played the title role in Annie at school in her home town of Leigh-on-Sea, but this is her first professional stage outing. She relates to Fran, saying: “She’s young and rebellious. She’s also ambitious and cheeky, so it’s the perfect role for me to play, although she’s probably a little more confident than I am.”

Smith is happy to be reunited with her Children in Need dancing partner three years after they bagged the Glitterball trophy. “We got on so well and that was the start of my Strictly journey,” she says, having gone on to compete on Strictly itself the following year when she eventually came second. “It’s so nice to be dancing together again, and this time we’ve got a whole tour rather than just a week.”

Clifton concurs. “We worked really well together, even though it was only for that one week, so it’s great to be reunited. I can’t wait for people to see what Maisie can do. We’ve seen her dancing and acting but she’s also a really good singer.

“As for the show itself, I know people who come see it are going to have an amazing time and that’s what everyone needs right now. It’s as good as musical theatre gets, with great singing, great dancing and a love story at its heart.”