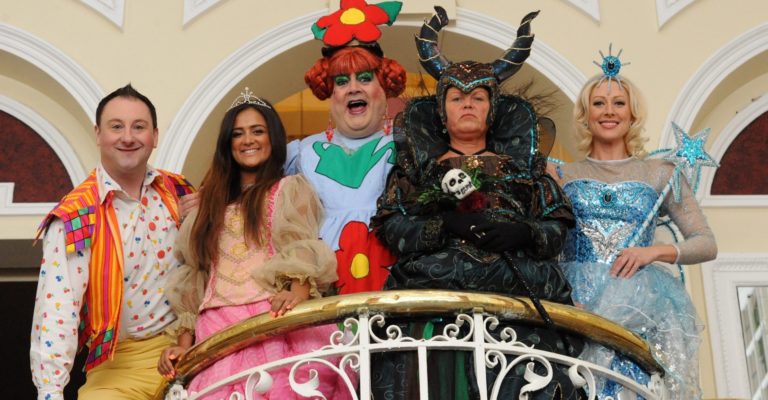 Oh no it isn’t! Well, yes it is actually! It’s pantomime season once again and as usual the region has more than its fair share of pantomimes to help you get into that festive spirit – we’ve rounded up the best here for you to take your pick. Make sure you don’t miss them – you don’t want to be shouting “they’re behind you” come January!

Written and directed by Neil Armstrong and Paul Hartley, the team behind last year’s amazing production of Cinderella, Jack and the Beanstalk will have the audience rolling in the aisles more than a chopped beanstalk down a hill. Jack must rescue the beautiful Princess Jilliana from the evil wizard Fleshcreep and with the help of Fairy Moonflower, his Mother Dame Trott and the well-intentioned Silly Simon, he’s well on his way to doing it. He just needs to climb the beanstalk, storm the castle in the sky and defeat an angry giant. Simple! Will Jack get the girl and bring prosperity to the town? Only one way to find out…

As is now traditional, Danny Adams, Clive Webb and Chris Hayward are back for the annual pantomime at Newcastle’s Theatre Royal. And yes, they’re causing just about as much mayhem as every other year. So with all that silliness going on in the background, will anyone actually manage to save Cinderella from the clutches of her evil stepmother and sisters? With the help from a Fairy Godmother, some mice, a pumpkin and just a little bit of wink-wink nudge-nudge humour, she just might impress Prince Charming enough…

The team at the Phoenix Theatre are getting a bit of a reputation for putting on super fun and wonderfully enchanting pantomimes and this year is set to be no different! In 2016 they’re taking on the classic Dick Whittington, the rags to riches tale of a young man and loyal cat as they set out on a quest to find fame and fortune. It’s guaranteed to be another hit with kids and adults alike, as alongside the thrilling adventure there’s also set to be show-stopping musical numbers, a mountain of slapstick humour and a good heap of audience participation. Get ready to break out all your favourite phrases….

It’s all about the Bear Necessities at Queen’s Hall Arts this Christmas! Instead of a more traditional tale they’re looking towards the rainforest to retell Rudyard Kipling’s classic tale The Jungle Book. Join young boy Mowgli, as he tries to outwit his enemies – including the terrifying tiger Shere Khan – alongside his best mates Baloo the bear, Bagheera the panther and Kaa the python. Hijinks ensue, but will there be a twist in the tail? Music, muppetry and laughter combine to help you find out!

The Newcastle Panto crew are back and this time they’re tackling the enchanting tale of Beauty and the Beast. After her father is thrown into a dungeon by the apparently ferocious Beast, Belle agrees to take his place and become the Beast’s prisoner. Eventually she learns that all of the castle’s inhabitants have been turned into bedknobs and broomsticks, cursed by the same spell that has turned Beast into a figure of fear. Meanwhile, she’s still being pursued by the vain Gaston, but Belle is slowly warming to Beast. Will true love prevail in a classic tale of not judging a book by its cover? Or will the devious Gaston triumph and win the hand of Belle? Hopefully it’ll all be happily ever after.

Make sure you hurry for this one because you’ve only got a couple of days to be whisked away from Bishop Auckland to the magical land of Agrabah. And you don’t want to miss the magic carpet because Aladdin’s in trouble and needs your help! The evil mage Abanazar has tricked Aladdin into retrieving a mystical lamp for him. Aladdin thinks that he’ll be able to make a wish to win the heart of the Princess but Abanazar has a few other plans (they’re all evil, trust us). Alongside PC Pong, Wishey Washey and, of course, you, will he be able to stop Abanazar before the land is put into chaos? With the help of modern tunes and spectacular magical illusions, something tells us he might…

If you can’t make it to one of the December pantomimes then there’s no need to worry! The Washington Theatre Group are presenting their annual pantomime and it’s on nearly all the way through January at Arts Centre Washington. This year they’re tackling The Swan Princess, a classic tale of love triumphing over evil (with quite a bit of magic and intrigue thrown into the mix as well!) So if you still need a bit of a festive fix in the new year, you know where to go!