Posted on September 26th 2022 by Whats on Northeast 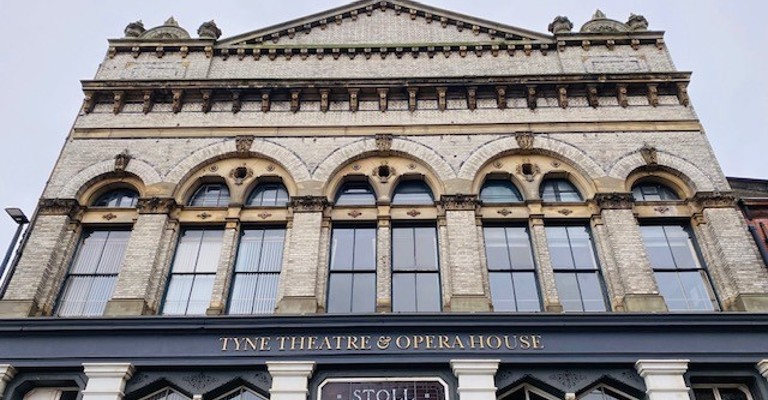 The Grade 1 listed Theatre was designed by industrialist and politician Joseph Cowen in 1867. He envisioned a ‘Theatre for Everyone’ offering warmth, light and escapism to working people during a time of heavy industry when life was hard. Since those early beginnings, the Tyne Theatre has also thrived as a cinema for several decades across the mid-1900s before returning to its original function in the eighties and has delighted audiences with the best in music, comedy, theatre, variety and more ever since.

Theatre Director Joanne Johnson says: “We’re thrilled to be celebrating the Theatre’s 155th birthday and very pleased with our shiny new signage which reflects the newest chapter in the venue’s history. As a Theatre with so much heritage and historical significance in the city, and as a community of theatre-lovers, reaching a milestone of 155 years is very special. We’re excited to welcome new and returning visitors to our beautiful venue for years to come!”

The Theatre’s birthday also coincides with their latest fundraising prize draw: one lucky winner will receive a private box for the upcoming Christmas Panto; Beauty & the Beast. As well as a box seating up to six, the winner’s group will receive a hamper of treats, and a shout-out during the show!

All the money raised from the prize draw will go directly towards the preservation and vital maintenance of the beautiful Grade 1 listed Theatre. It’s open until Friday 31st September and the winner will be notified in the week following. You can head to crowdfunder.co.uk/p/tyne-theatre-charity-draw-4/  to enter.

Other ways to support the Theatre and ensure they see another 155 years of wonderful acts and fantastic events, is to join their Friends’ Club – giving you waived booing fees, exclusive pre-sales, ticket offers and more. You or your business could also sponsor a seat in the Theatre’s auditorium for £150 – which would be noted on the seat in a form of a plaque – and join local comedians Sarah Millican, Chris Ramsey, and Carl Hutchinson who already sponsor seats.

It’s a venue offering ‘something for everyone’, and family favorites coming up include The Smartest Giant In Town and Room on the Broom for the little ones, The Canterville Ghost a gloriously ghoulish vaudeville spectacular for everyone 12+, and this year’s Christmas’ panto, Beauty and the Beast for the whole family.

The best way to keep up with all the latest news and events from the venue is by following Tyne Theatre and Opera House on Facebook, Twitter, Instagram and now TikTok!

For more information on the Tyne Theatre and Opera House, to book tickets for upcoming shows, or find out how to support them, please see their website: https://tynetheatreandoperahouse.uk