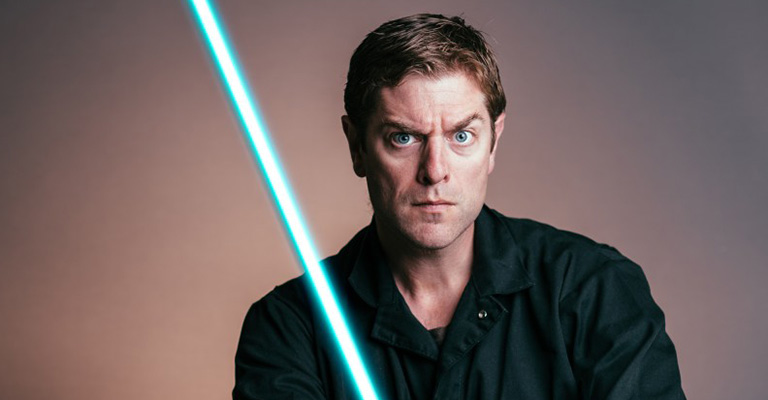 You know how there’s so many memorable characters in Star Wars? Han Solo, Luke Sywalker, Chewbacca, Darth Vader, Princess Leia…? Well, what if all of those iconic characters were portrayed by just one man? That’s what actor Charles Ross is trying to do as he comes from a galaxy far, far away (Canada) to present his One Man Star Wars trilogy. He’ll take you through the first three Star Wars films, single-handedly playing all the characters you know and love, condensing it all into a lean, mean 60 minutes. Don’t know how he does it? Find out at the Gala…

The double Academy Award-winning film Ghost has become a classic romantic tale of love that never dies (and has a probably the most famous pottery scene in cinema). It follows a young woman whose partner is tragically murdered one night, but with the help of a phony psychic, he manages to make contact with her in order to keep her from grave danger. This new adaptation by Bill Kenwright stages the classic tale of love, despair and hope with all the famous scenes and set-pieces, as well as featuring new music and original staging.

As part of the International Print Biennale, the Customs House in South Shields is getting its own exhibition from one of the world’s finest contemporary printmakers. Claudia Sacher uses print to explore whether patterns emerge in the things that we say and do – and whether where we’re born can have an impact on these decisions. It’s an innovative way to explore a social issue, using life sized drawings depicting imagined stories as well as limited edition prints to look at the concept more closely. The exhibition runs until 20th November 2016.

This year marks the 30th anniversary of the Chernobyl disaster, one of the worst nuclear accidents in history. Three decades on, Théâtre Sans Frontières presents a special production that looks at the disaster through the lens of documentary film and eyewitness testimony, combined with evocative music and movement. It travels between the UK and Ukraine, following the events as if they’re just unfolding. It’s set to be an enlightening and touching story of humanity on the edge of disaster.

It’s the classic tale of a puppet who just wants to be a real boy, a heart-warming tale of human spirit and paternal love that’s touched the hearts of millions. The Jasmin Vardimon Company is now taking the story of the world’s most famous marionette and adapts it into the company’s uniquely theatrical choreographic style. The new production combines physical theatre, quirky characterisation, innovative technologies, words and dance to look a bit deeper into what it means to be human. Funny and dramatic in equal measure, Pinocchio will warm your heart as well as provide a new spin on a classic tale.

The two members of the Pajama Men have won accolades across the globe but this week they’re in Durham exploring a pretty hefty book: Dumas’ The Three Musketeers. The shape-shifting double act will be performing a live, comic existential meltdown that’s actually supposed to be their version of the classic epic novel. In just under an hour. It’s a pretty monumental task for anyone, but the Pajama Men (without props and costumes) might just pull it off. If not, it’s at least a glimpse into their weird and wonderful world…

In case you thought that Hexham weren’t getting in on the International Print Biennale act, think again. Leaping Salmon (or Gyotaku) is the Queen’ Hall Arts Centre’s answer to your prayers. The residency focuses on Rachel Ramirez, an English artist living in Portugal, who is also an expert in the Japanese print process of Gyotaku (which dates bac to the 1800s and arises from fishermen taking ink impressions from their catch). There’s also a series of workshops on offer throughout the exhibition’s run, which ends on 30th November.